Omicron is ‘killing people’ and should not be called ‘mild’, WHO warns

Dr Tedros warned that "while Omicron does appear to be less severe compared to Delta, especially in those vaccinated, it does not mean it should be categorised as 'mild'." 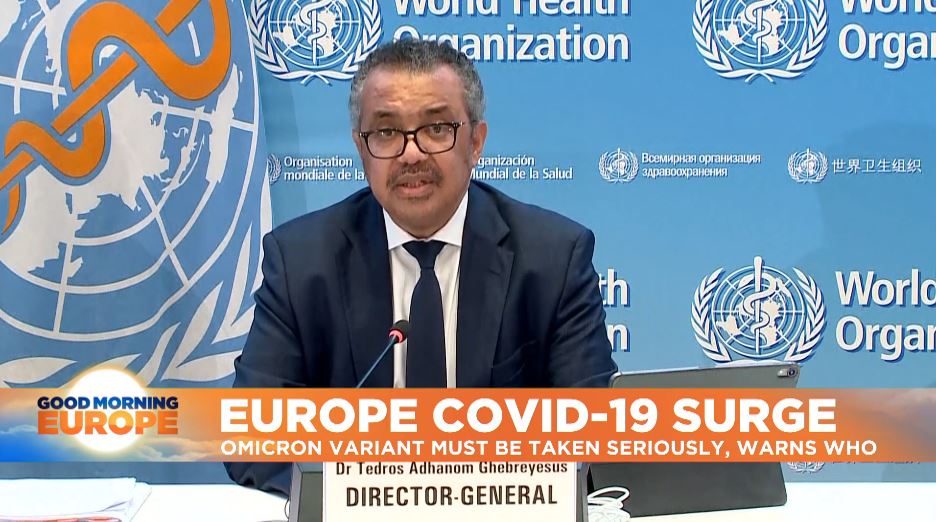 euronews.com | The head of the World Health Organisation (WHO) warned on Thursday against describing the Omicron variant as “mild” amid a “tsunami of cases” overwhelming health systems across the world.

“Last week, the highest number of COVID-19 cases were reported so far in the pandemic,” Dr Tedros Adhanom Ghebreyesus told reporters during a regular press briefing.

The UN agency’s latest weekly report showed that a record 9.5 million COVID-19 infections were reported across the world over the previous week — a 71% increase on the previous seven-day period.

All regions reported a surge in the number of COVID-19 infections with the largest increase (100%) observed in the Americas, followed by South-East Asia (78%) and Europe (65%).

Yet, the WHO chief stressed that “we know, for certain, that this is an underestimate of cases because reported numbers do not reflect the backlog of testing around the holidays, the number of positive self-tests not registered, and burdened surveillance systems that miss cases around the world.”

Omicron, first detected in South Africa in November, has been blamed for the latest wave. The variant was designated “of concern” by the WHO because studies show it is more transmissible and more resistant to treatment than other variants, including Delta, with people more likely to be infected or reinfected even when fully vaccinated.

Dr Tedros warned that “while Omicron does appear to be less severe compared to Delta, especially in those vaccinated, it does not mean it should be categorised as ‘mild’.”

“Just like previous variants; Omicron is hospitalising people and it is killing people,” he stressed.

There were 41,000 lives lost to the disease last week — a 10% week-on-week rise — bringing the pandemic’s total death toll to over 5.4 million deaths, according to the WHO’s update. The African region is the only one however to have reported a weekly increase in new deaths (22%) although Europe had the highest death toll with 22,817 fatalities.

“The tsunami of cases is so huge and quick, that it is overwhelming health systems around the world,” Dr Tedros said.

“Hospitals are becoming overcrowded and understaffed, which further results in preventable deaths from not only COVID-19 but other diseases and injuries where patients cannot receive timely care,” he added.

The WHO chief reiterated that the vaccine remains one of the most effective tools against the pandemic but deplored once more that access across the globe is so unequal.

“At the current pace of vaccine rollout, 109 countries would miss out on fully vaccinating 70% of their populations by the start of July 2022,” he said.

“The essence of the disparity is that some countries are moving toward vaccinating citizens a fourth time, while others haven’t even had enough regular supply to vaccinate their health workers and those most at risk.

“Booster after booster in a small number of countries will not end the pandemic while billions remain completely unprotected,” he emphasised.