It is undeniable that Mr. Killa and Boyzie are the two best performers to ever grace the Grenada Soca Monarch stage.

Note: The views expressed in the following article are those of the writer and not necessarily the views of partygrenada.com

MR. KILLA vs. BOYZIE – WHO IS GRENADA’S GREATEST SOCA MONARCH FINALS PERFORMER
by Dexter Mitchell, Made in Grenada

Penned just about 24 hours ago the Made In Grenada published piece entitled Soca Supremacy has (as intended) incited reactions from fans as to who will win a Grenada National Soca Monarch Finals showdown between Boyzie and Mr. Killa. 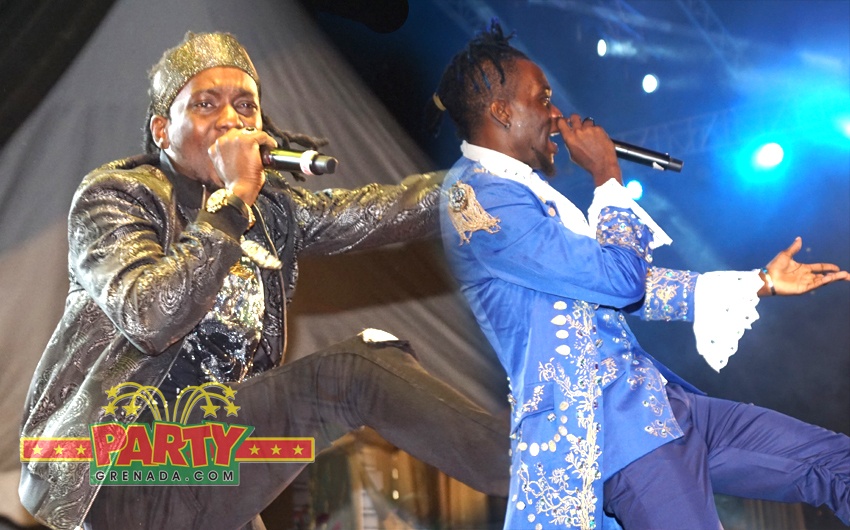 Almost daily, sports enthusiast debate who is the greatest among Jordan, Kobe, Le Bron etc., in soccer its Pele, Maradona, Messi and Renaldo and the list of activities and personalities can go on and on.

In some instances sheer numerical comparisons are used to tilt the debate in one particular direction. For example some fans believe that Jordan’s 6 rings (championships) supersede all other on court accomplishments and by virtue of those results Jordan is the greatest basketball player ever.

It is unfair to make comparisons across eras when there are variables that have to be taken into consideration. Present-day nutrition and training facilities, access to better health services and equipment – even strength and quality of opponents makes the debate unending and intriguing.

To satisfy those who have responded and who would like a deeper insight into the Boyzie vs. Mr. Killa contest we will take a look at what both Artistes have done during their respective phases of conquest.

Boyzie has won 5 Soca Monarch titles having competed every year since 2012 – meaning in eight attempts Boyzie has succeeded 5 times, placed 2nd once and copped a third place finish. Boyzie has also done the Soca Monarch and Road March title double once, in 2013. Mr. Killa did the same double in 2009.

Mr. Killa’s Soca Monarch success was not as instantaneous as Boyzie’s but when Mr. Killa made his Soca Monarch finals debut in 2002 he did so against the likes of the great Inspector, Japs and Sheldon Douglas who was winning his second consecutive title and his 3rd in four years. It was not yet the norm for Artistes to opt out of competition – to be the best one had to beat the best.

The introduction of sensational introductions was a Mr. Killa phenomenon that began in 2004 and reached a scintillating crescendo in 2009 with a video pre-performance video and overall presentation that is still the industry standard. To determine how good a Competitor’s video presentation is one simply has to make a comparison against that 2009 video, not too many videos since have had the same impact – although a large percentage of them have borrowed from that trend-setting production.

Mr. Killa has never won back to back National Soca Monarch titles, a shortfall that prompted other Artistes to use the piccong line ‘he cannot defend’. But when he felt he had something to prove, when he thought his genius was being taken for granted he rebounded fiercely ,creating pandemonium, whether at the Tanteen Playing Field (in 2006) or the National Stadium (2009).

Before Boyzie became famous for instigating super-human behavior from his fans having them shake down the fence at Soca Monarch, Mr. Killa started the trend in 2009 with his commanding rendition, ‘De Fence’. In fact most of his bookings that carnival season had to come with a promise not to incite patrons to remove, lift up, shake down or destroy any fences at fetes where he performed.

It is undeniable that Mr. Killa and Boyzie are the two best performers to ever grace the Grenada Soca Monarch stage. To what extent they will be successful in a head to head clash against each is extremely fascinating and hopefully something that can happen in the near future.

One suspects that if the conditions are right, as set forth by the main organizers of carnival, it is a show down we are likely to see materialize sooner than anyone might think possible.

It would be fair to surmise that neither Artiste has anything left to prove on a Soca Monarch stage here in Grenada but the competitive nature of the individuals and the extent to which they will go to outdo each other will be historic, epic and a once in a lifetime treat for soca fans.

Unlike the Jordan vs. Le Bron debate – they starred in different eras – we will never get to see them compete, in their primes, against each other.

However, Mr. Killa is at the pinnacle of his soca game and the same applies to Boyzie

We will never know the winner, not until the competition actual materializes, but one thing is certain – on that fateful Friday night no fence at the National Stadium will be safe!

Note: The views expressed in the following article are those of the writer and not necessarily the views of partygrenada.com