Disturbance #1:
Showers and thunderstorm activity continue to become better organized in association with an area of low pressure located over the central subtropical Atlantic, about 950 miles west-southwest of the westernmost Azores. Environmental conditions appear marginally favorable for additional development, and a tropical depression is likely to form within the next day or so before upper-level winds become less conducive later this week. The system should move generally northward or northeastward while remaining over the open waters of central subtropical Atlantic. There is a high (80%) formation chance through 2 to 5 days. This system poses no threat to the State of Grenada.

Disturbance #2:
A central Atlantic tropical wave has its axis along 51W, extending from 04N to 15N, about 614 nautical miles (nm) east of Grenada. It is propagating westward at 15 kt. Satellite imagery shows increasing clusters of numerous moderate to strong convection ahead of the wave from 08N to 11N between the wave and 59W. Based on the forward speed and model projections, the axis of this wave should traverse the island chain on Wednesday night into Thursday morning inducing cloudiness and showery activity, with a medium chance of thunderstorms across the State of Grenada from Wednesday evening if conditions remain favourable within the wave environment. Gradual development of this system is forecast during the next several days as the system approaches the Windward Islands, and a tropical depression could form toward the latter part of this week or weekend as the system moves into the eastern and central Caribbean Sea. There is a low (near 10%) chance of cyclone formation through 2 days and a medium (50%) chance within 5 days. This system poses no immediate threat to the State of Grenada.

Major Hurricane Fiona:
At 800 am, the center of Hurricane Fiona was located by an Air Force Hurricane Hunter aircraft near latitude 21.6 North, longitude 71.2 West. Fiona is moving toward the north-northwest near 10 mph (17 km/h). This general motion is expected to continue through today, followed by a turn toward the north tonight or Wednesday. On the forecast track, the center of Fiona will continue to move near Grand Turk and the other eastern Turks and Caicos during the next few hours. Fiona is a Category 3 hurricane on the Saffir-Simpson Hurricane Wind Scale and the maximum sustained winds remain near 115 mph with higher gusts. Strengthening is forecast during the next couple of days. Hurricane-force winds extend outward up to 30 miles from the center and tropical-storm-force winds extend outward up to 150 miles . The estimated minimum central pressure from Air Force Reserve and NOAA Hurricane Hunter data is 960 mb (28.35 inches). This system poses no threat to the State of Grenada. 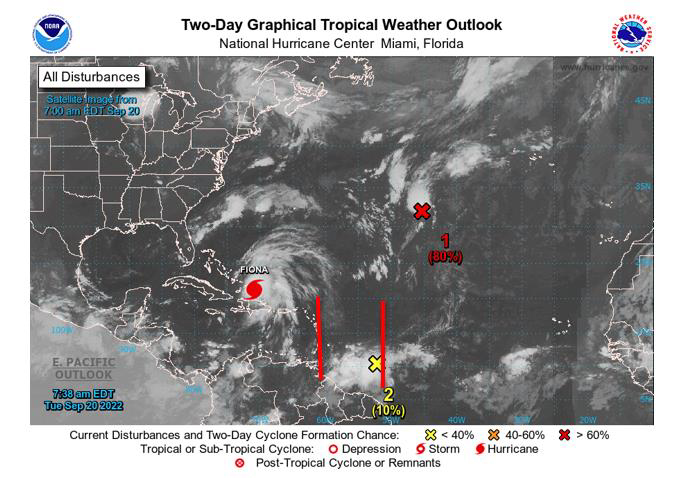 The Meteorological Service will continue to monitor the progress of these systems and provide updates in a timely manner.

Elsewhere, tropical cyclone formation is not expected. The next update will be issued at 2:00 p.m.
CÉCIL MITCHELL
DUTY FORECASTER

NHC 8AM UPDATE | Broad area of low pressure near the…

NaDMA UPDATE | STRONG TROPICAL WAVE TO AFFECT THE STATE ON…