WATCHES AND WARNINGS
——————–
CHANGES WITH THIS ADVISORY:

A Tropical Storm Watch is in effect for the southern and western coasts of Haiti from the southern border of the Dominican Republic to Le Mole le St. Nicholas.

SUMMARY OF WATCHES AND WARNINGS IN EFFECT:

A Tropical Storm Warning is in effect for…
* Barbados
* Martinique
* St. Lucia
* St. Vincent and the Grenadines

A Tropical Storm Watch is in effect for…
* Grenada and its dependencies
* The southern and western coasts of Haiti from the southern border of the Dominican Republic to Le Mole le St. Nicholas

A Tropical Storm Warning means that tropical storm conditions are expected somewhere within the warning area within 36 hours.

A Tropical Storm Watch means that tropical storm conditions are possible within the watch area, in this case within 36 hours.

Interests elsewhere in the Windward Islands, Leeward Islands, the Virgin Islands, Puerto Rico, the Dominican Republic, Haiti, eastern Cuba, and Jamaica should monitor the progress of Elsa. Additional watches and warnings will likely be required later tonight and Friday.

For storm information specific to your area, please monitor products issued by your national meteorological service. 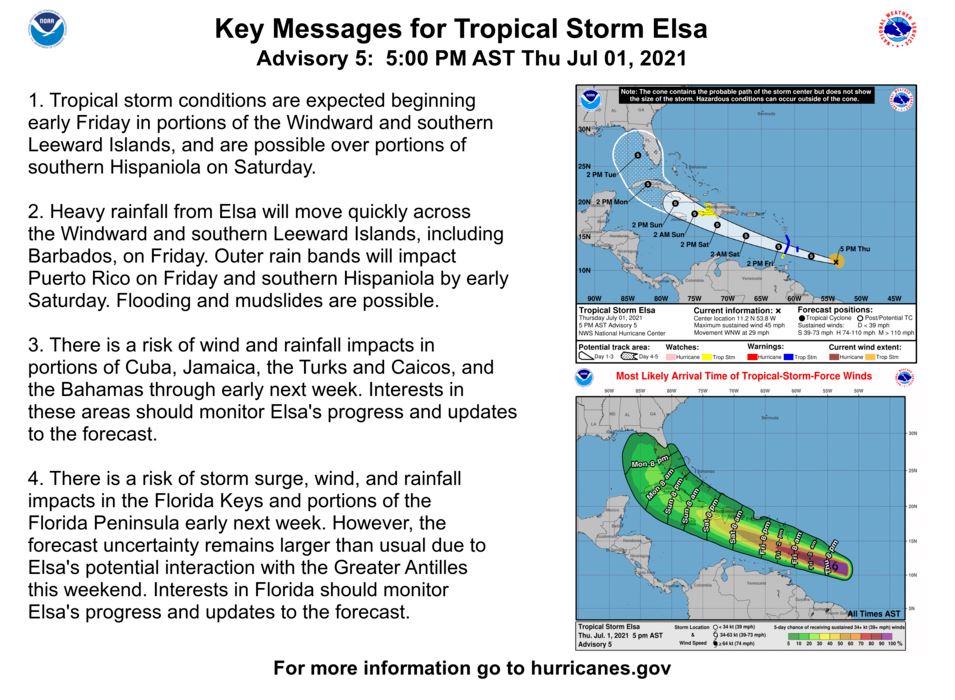 DISCUSSION AND OUTLOOK
———————-
At 500 PM AST (2100 UTC), the center of Tropical Storm Elsa was located near latitude 11.2 North, longitude 53.8 West. Elsa is moving toward the west-northwest near 29 mph (46 km/h) and this general motion is expected to continue for the next couple of days. On the forecast track, Elsa will pass near or over portions of the Windward Islands or the southern Leeward Islands on Friday, move into the eastern Caribbean Sea late Friday and Friday night, and move near the southern coast of Hispaniola on Saturday. By Sunday, Elsa is forecast to move near Jamaica and portions of eastern Cuba.

Maximum sustained winds are near 45 mph (75 km/h) with higher gusts. Some strengthening is forecast during the next 48 hours.

Tropical-storm-force winds extend outward up to 90 miles (150 km) mainly to the north of the center.

HAZARDS AFFECTING LAND
———————-
Key messages for Elsa can be found in the Tropical Cyclone Discussion under AWIPS header MIATCDAT5, WMO header WTNT45 KNHC and on the web at
www.hurricanes.gov/graphics_at5.shtml?key_messages.

STORM SURGE: A storm surge will raise water levels by as much as 1 to 3 feet above normal tide levels in areas of onshore winds along the southern coast of Hispaniola.

RAINFALL: Elsa is expected to produce rainfall totals of 3 to 6 inches with maximum amounts of 10 inches on Friday across the Windward and southern Leeward Islands, including Barbados. This rain may lead to isolated flash flooding and mudslides.

Over Puerto Rico, rainfall of 1 to 3 inches with localized amounts of 5 inches is expected Friday into Saturday. This rain may lead to isolated flash flooding and minor river flooding, along with the potential for mudslides.

Along portions of southern Hispaniola, rainfall of 4 to 8 inches with isolated maximum amounts of 12 inches is possible on Saturday.

This rain may lead to scattered flash flooding and mudslides.

[VIDEO] Lavaman at Bucket vs Cooler 2022